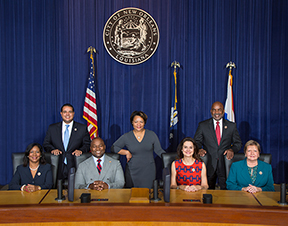 An ordinance requires any stolen guns to be reported to the police as well as banning some guns in recreation facilities was approved last Wednesday by a New Orleans City Council committee, allowing adoption by the full council this week.

This is a version of an ordinance originally proposed by New Orleans Mayor Mitch Landrieu and the council from April. The rules of the ordinance have been changed recently, in an effort not to duplicate already in place state laws or those that prevent local governments from enacting gun-control measures that exceed those that the state legislature has put in place.

“This keeps guns away from young people and out of the hands of people that will do bad things.” said Councilman Jason Williams, one of the original sponsors of the legislation. “One part of the issue (of gun violence) is the people who make these terrible choices, sometimes in a fraction of a second,” Williams said. “The other part is the instrument they use to do this violence. This addresses that tool and the availability of that tool.”

The main rule of the legislation is a requirement that lost or stolen guns must be reported to the police within 48 hours after their owners realize they are missing. If the owners do not do so, they will be hit with a $250 fine for the first offense and a $500 fine on the second.

The second part of the bill will ban guns in city-owned buildings, parks or other facilities where New Orleans Recreation Development Commission activities occur.

However, in good news, concealed carry permit holders and law enforcement officers would be exempt from that ban.

But even with the ruling allowing a bit of leeway for concealed carry permit holders, it is a worry that not a single member of the public spoke at the committee meeting.